'Just The Way I Planned'

David Nelson Ostrosser (DNO) was born August 2, 1955 in Chatham, Ontario, about the time Rock and Roll officially was. His parents were both intensely musical, with his mother, Megan, playing piano from a young age, as well as marimba in the Pentecostal Church her family went to in the Montreal suburb of Greenfield Park, on the south shore of the St. Lawrence. 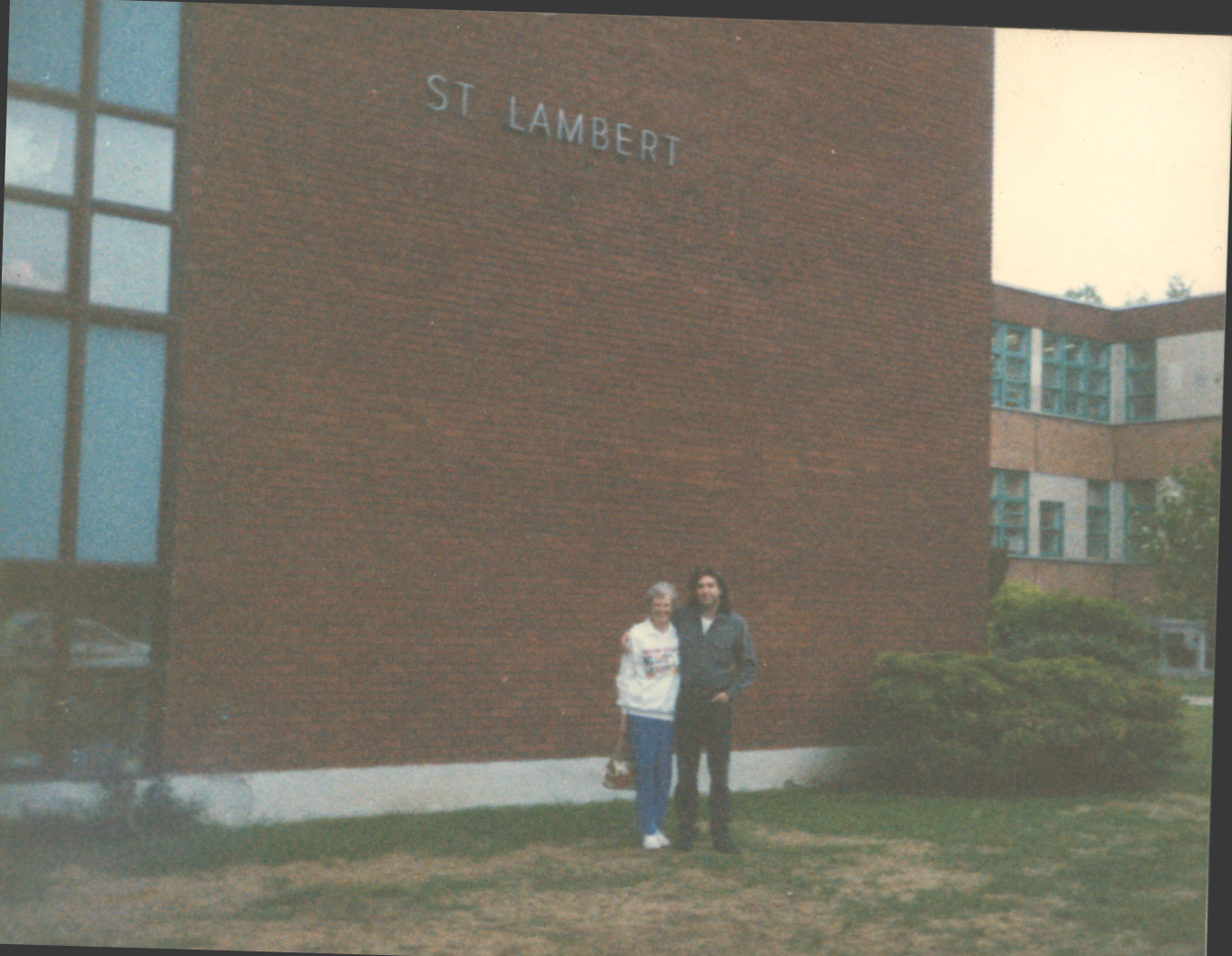 'Me and my mom in 1992, in front of her high school, just a few blocks from her childhood home near the border of Greenfield Park and St-Lambert'

David’s father was a gospel singer, also from a very young age, and at 17 he was already accompanying an evangelist preacher in forays down through the Eastern United States, as far as Florida. Robert (Bob) Ostrosser, sang primarily with the Rutledge brothers in the group “The King’s Men”, which, in various configurations since their inception in the early fifties, came together regularly for concerts and television appearances right up into the 2000s. 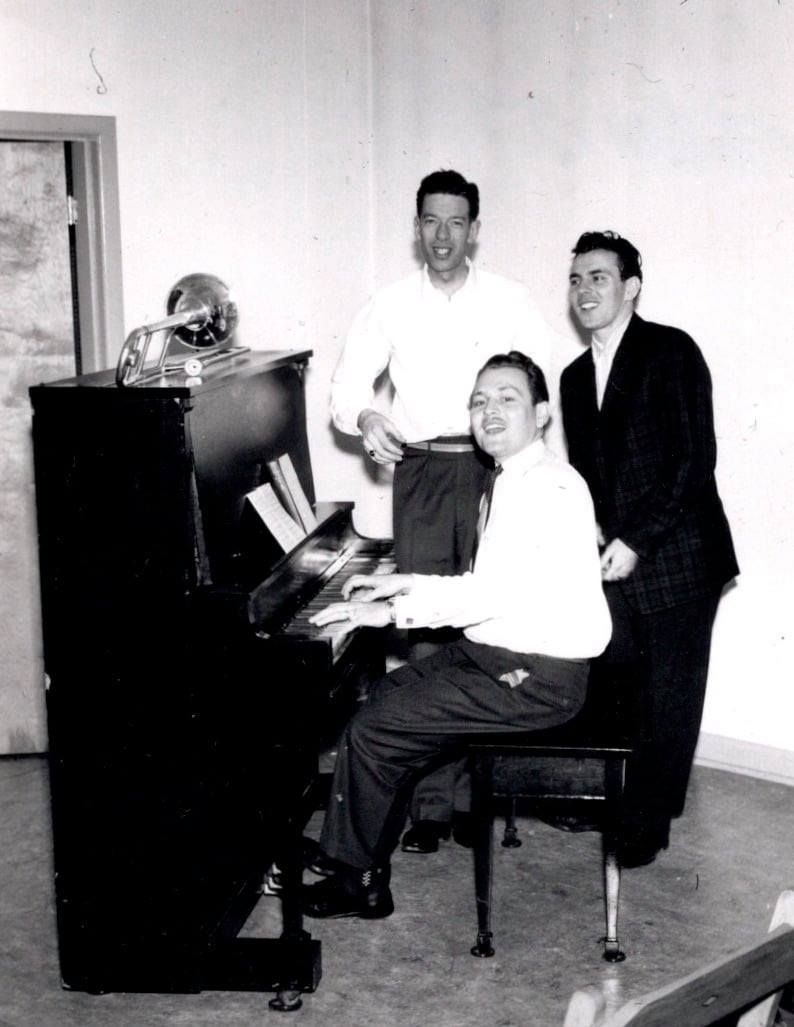 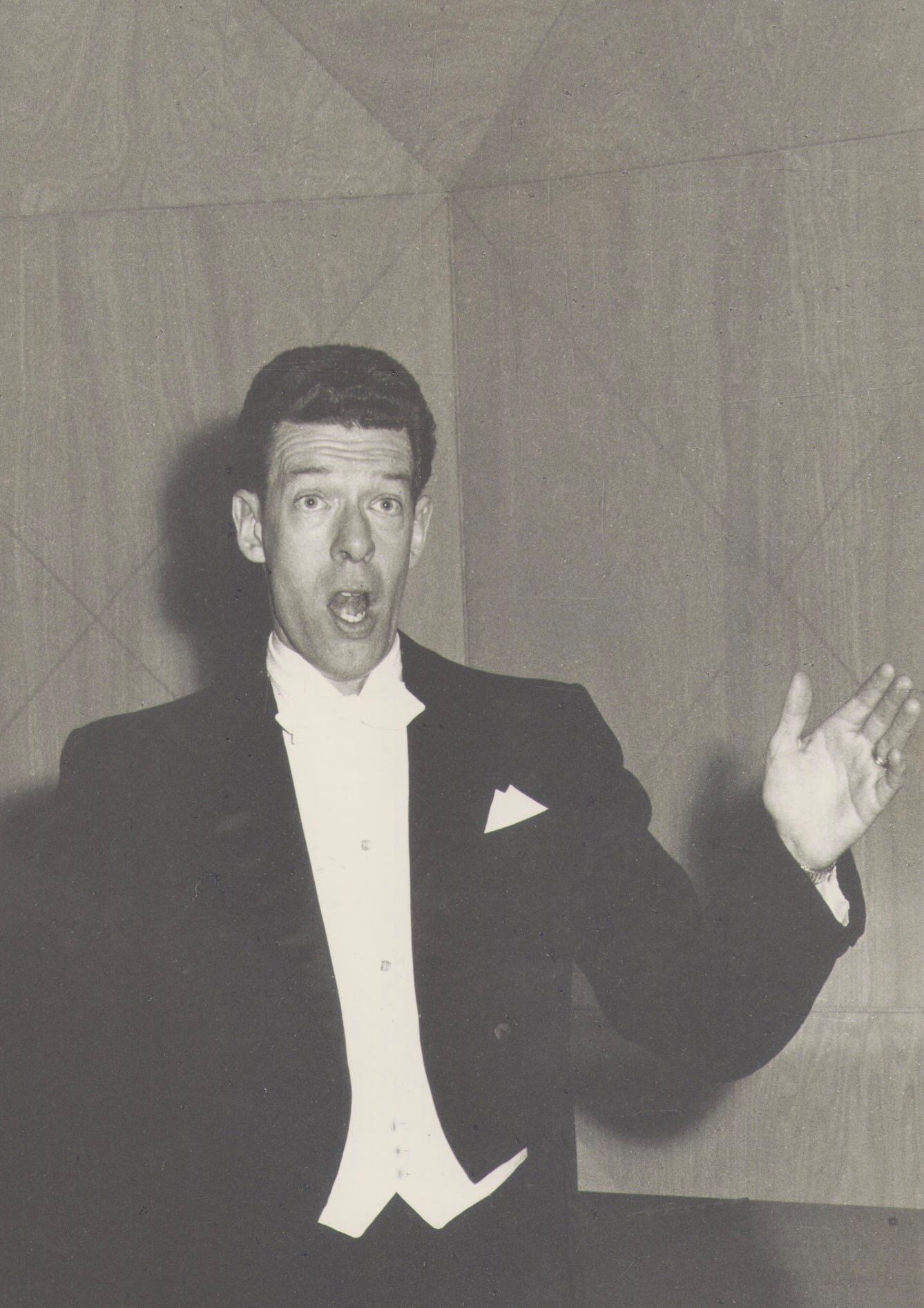 The type of harmony singing that David attempts to invoke in “Words of God”, for instance, was what he absorbed practically from osmosis, as the sound of The King’s Men practicing their vocal arrangements surrounded him practically from the time he was born. That, and the Southern gospel quartet music of the Statesmen, the Weatherfords or the Blackwood Brothers that was forever on the family turntable, meant that by his teens, harmony singing was second nature for DNO, as well as for his younger brother Doug. 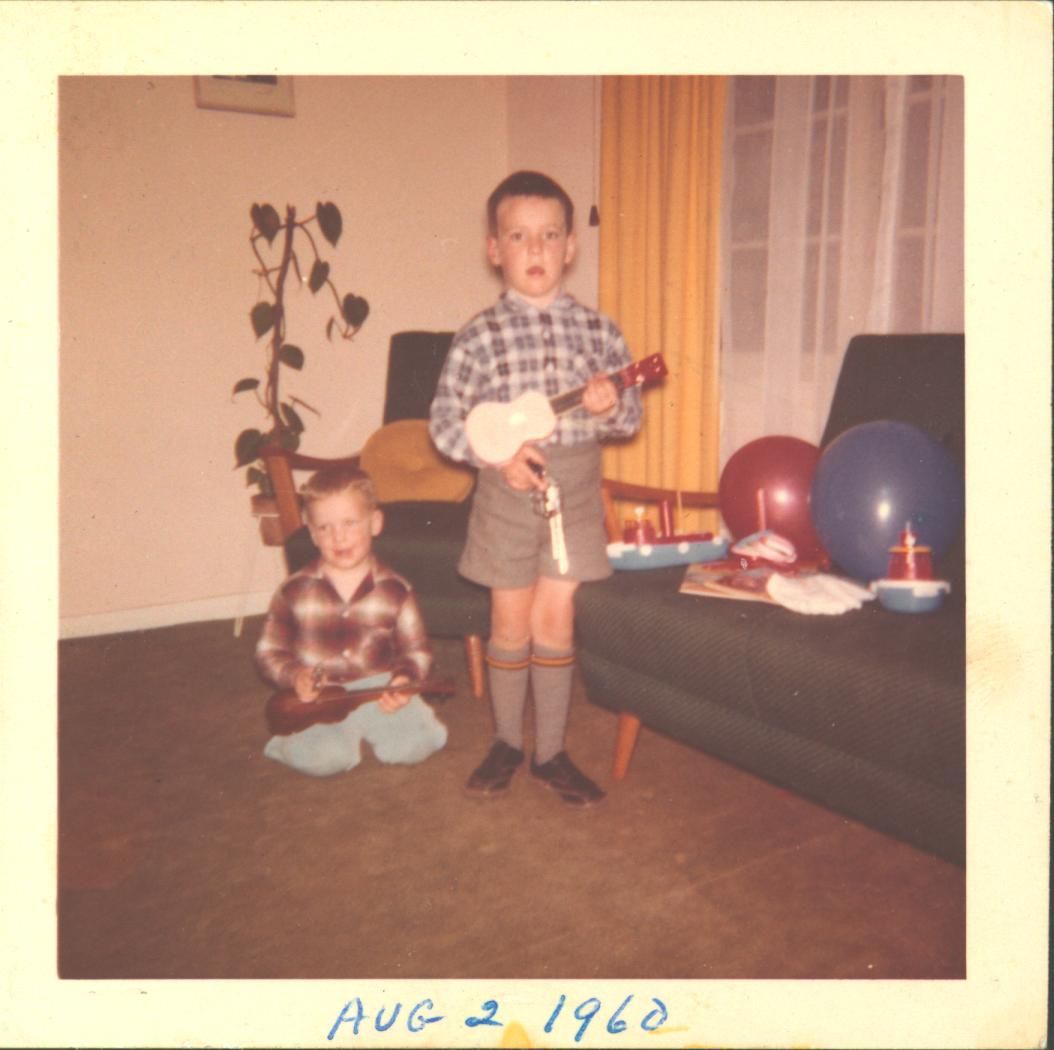 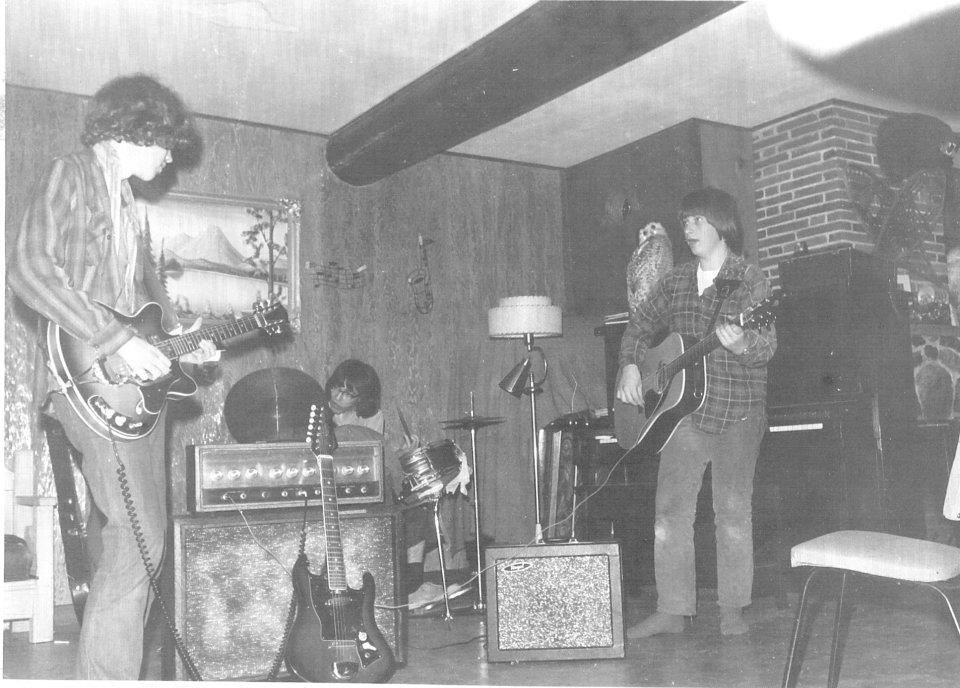 The Ostrosser brothers in their early teens, with Bernie Neufeld on the acoustic.

It was in 1970 that David and Doug started getting interested in music in earnest, Doug having picked up the guitar at 11 years old, and David having ditched his trumpet for a drum set, so that they could play some rock and roll together, much to the dismay of their gospel-loving parents. That summer in Mission, British Columbia where they were living (not far from Vancouver), the boys had confiscated their dad’s Panasonic 4-track reel-to-reel and had recorded CFUN’s top 100 off the radio, discovering music like Joe Cocker’s Cry Me a River, Neil Young’s Southern Man, as well as hits from the Guess Who and Chicago. They soon learned to jerry-rig the Panasonic to record sound-on-sound, and started writing and recording their own songs. 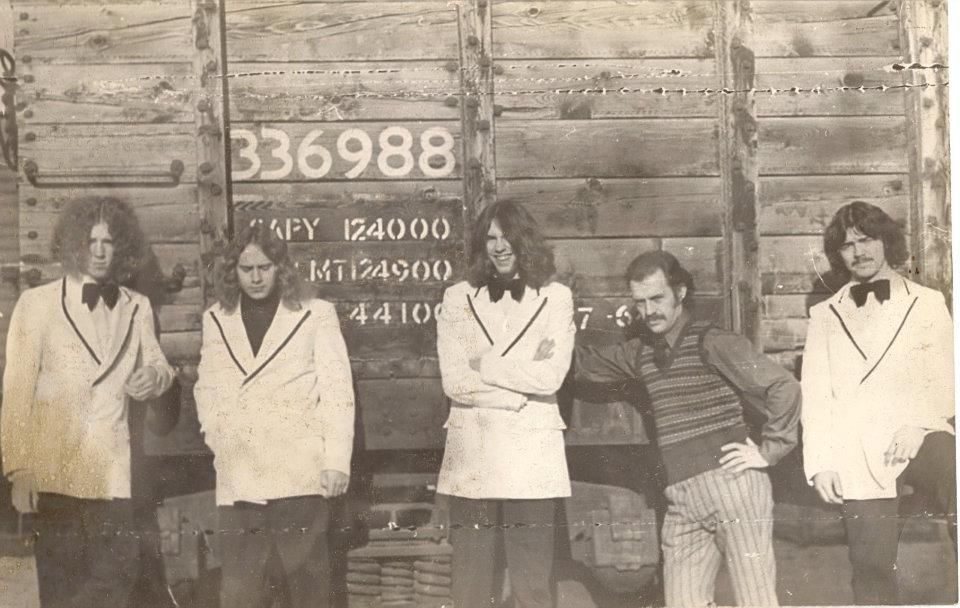 David’s drumming was soon noticed by the local musicians and at 16 he was playing legions and bars with the local celebrities, sitting with the other young backup musicians at an isolated table free of alcohol due to their age. Gaining experience onstage, these young players gradually worked themselves closer to the kind of music they were itching to play, first with a talented blues singer from England, Steve Caller, as the “John Beggs Blues Band”, and later forming their own “John Beggs Band”, playing the FM rock that they were passionate about. On the weekends, at raucous hall dances put on by the local hockey association, the boys whipped up emotions with covers of “The Letter”, “Southern Man”, “Ramblin’ Man”, culminating in their version of Derek and the Dominoes’ “Layla” that showed off brother Doug’s prowess with the Duane Allman-style slide techniques that you can hear on DNO’s “Love Ain’t Fair”, with Doug guesting on the guitar. By this time, David had switched from drums to piano, so he could be out front, as he was doing most of the lead singing. But weekends weren’t enough, and the road beckoned with the promise of full-time engagements that would surely lead to stardom. The John Beggs Band commenced their illustrious full-time career at one of the seediest mob-run “cabarets” in Vancouver, ‘Fort Boogie’, as the house band.

To make a long story short, David’s next few decades would be spent criss-crossing Western Canada with some combination of musicians in duo, trio or full-band configuration, until there was no one left willing to put themselves through a life in hotel rooms, and drives that took them from Mission to up through central and northern BC, all the way up to the Yukon and the Northwest Territories. 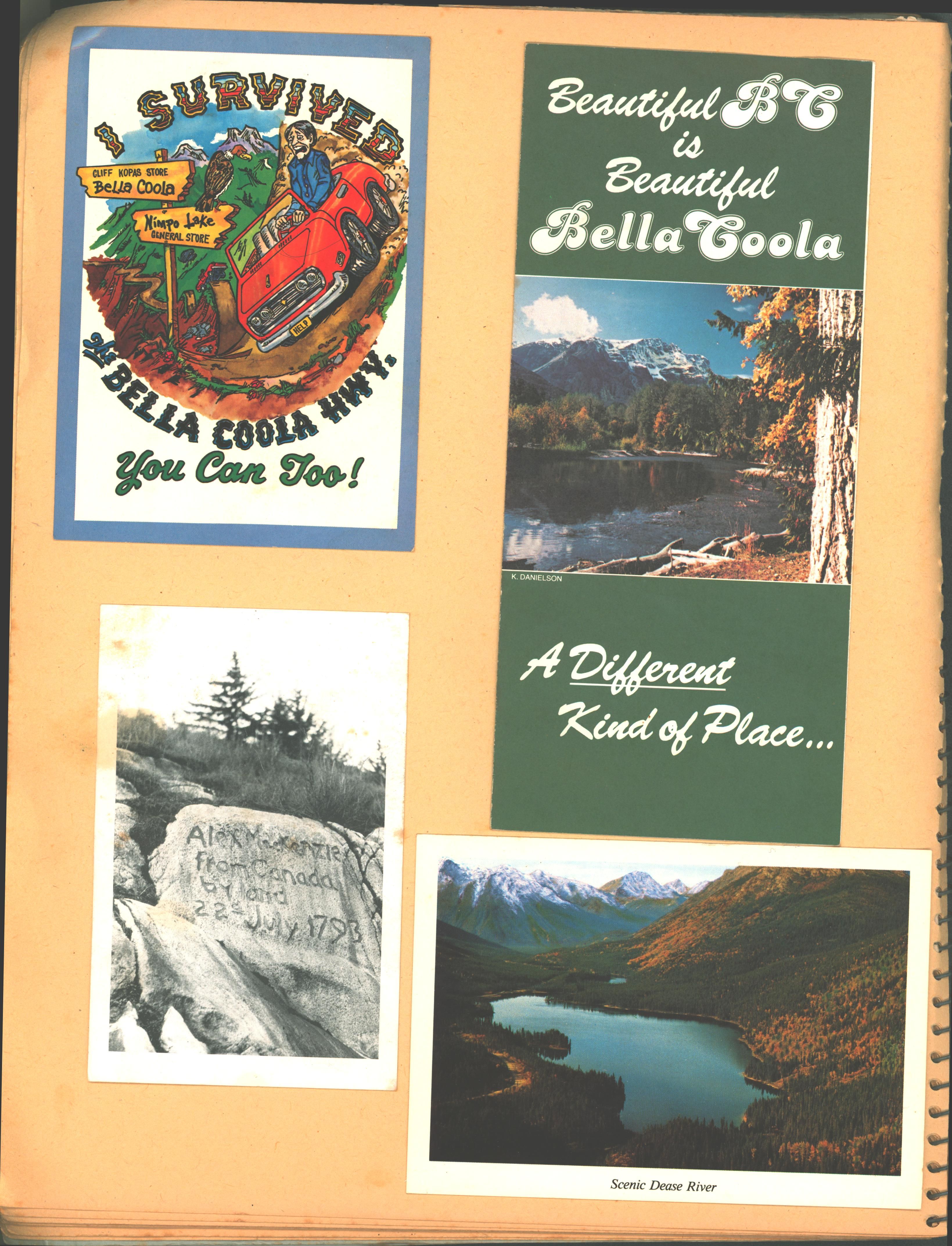 Scrapbook memories from our travels in Western Canada. To get down to Bella Coola from the BC Interior plateau, there was an 18% grade down to ocean level. The locals said "Take a lunch, because if you go off the road, you'll have time to eat it before you hit bottom". Also, a photo of where Alexander MacKenzie arrived in 1793.

David produced a few singles along the way during the pioneer days of self-promotion, and had some success, with his typically tongue-in-cheek “Check Out Baby (Don’t Check Out On Me)” finding favour in some large radio markets, such as CKBY in Ottawa.

David had long been interested in Francophone Quebec culture, seduced by the music of Harmonium and other Québécois artists, and one week in November of 1990, finding himself in Chauvin, Alberta, playing a solo gig, with his trusty old Dodge stretch van waiting outside, he decided to do what he’d never dared before: to go visit Quebec and see what it was like.

Following a snowstorm across the country, checking in vain with local booking agents for engagements along the way, David finally landed in Sudbury, Ontario, broke. He was able to sell part of his PA to a local music store, and limped along as far as Gatineau, Quebec, just across the river from Ottawa. It wasn’t the thriving Peace and Love era in the metropolis of Montreal, that had fired his imagination all these years, but that was passé anyway, and this was technically Quebec.

He managed to arrange some club performances in Ottawa, sleeping in his van, as he had done the previous week, and soon found a place in Gatineau. He hooked up with a guitar/drum duo that had a house gig on the riotous Hull strip, where rowdy Ontarians would cross the bridge every evening for last call, to take advantage of the 3 AM closing time on the Quebec side. The Hull strip was a circus of neon and flashing police lights in the early 1990s, and violence and drug busts were commonplace. One day in the Louis José bar where David’s three-piece was playing, the crowd was suddenly joined by about a dozen police officers. They stood there observing the scene while we continued to play on, wondering what was about to go down. Slowly three or four of the agents came right up on to the stage… and arrested our drummer. We knew that our drummer was despised by the police because his brother had killed a police officer a few years before, and they must have gotten a tip that he was carrying drugs. The trio was over, but David was rehired as a solo act a months later.

Part of the strategy of moving East included the different demographics, with a much denser population, fewer kilometers of driving to get the gig, and the possibility of playing weekends while augmenting the income with other work. After working with several other guitarists and singers during the 1990s, David put his music career on pause, went back to school, and came out with a Bac in translation from the University of Ottawa in the early 2000s.

After marriage and two kids, he found himself drawn back into music after meeting multi-instrumentalist producer René Gely, who helped produce the 2010 David Nelson Ostrosser album titled “Second Hand Store”. An EP aimed at the Francophone market soon followed, which included an ambitious music video for the song, “G’Ling G’Ling”, created with computer animation artist Yvan Roy. That project was sparked by an earlier video inspired by the bushy eyebrows of Canadian Liberal leader Michael Ignatieff, that was seen by millions of Quebecers on Jean-René Dufort’s popular ‘Infoman’ program, which is roughly the equivalent of English Canada’s “The Rick Mercer Report”. In 2012, “Célébration de solstice sentimentale”, another of David’s videos, once again caught the eye of ‘Infoman’ and Dufort’s lieutenant MC Gilles, and that attention has made it David’s most popular video so far. That video and song were originally done in English as “Sappy Sentimental Solstice”, and the holiday tune is included in David’s latest album ‘My Bachelor Ways’.

By 2020, enough new songs had accumulated that David again called up his friend René Gely, who was a bit at loose ends with the pandemic situation, and together they were able to dodge the restrictions and schedule recording sessions with some of Ottawa’s best musicians, mostly during the late summer when conditions relaxed somewhat, and over the course of 7 or 8 months they were able to put together another fine album of David’s tongue-in-cheek compositions. René’s arrangements and playing on the album earned him a publishing credit on at least half of the songs, but for the last song recorded on the album, he was given the lyrics to “Strawberry Blonde (With A Fluffy Microphone)”, and told to come up with the music – an exercise that yielded very nice results. The music on that song is all René’s.

So that’s the story so far. If the “Big Bio” is long, it’s because DNO’s life and his musical endeavors have spanned a long period. Is 'My Bachelor Ways' a last gasp of creativity? Or is another foray into Québécois music in the cards?